To further advance our understanding of the brain, new concepts and theories are needed. In particular, the ability of the brain to create information flows must be reconciled with its propensity for synchronization and mass action. The theoretical and empirical framework of Coordination Dynamics, a key aspect of which is metastability, are presented as a starting point to study the interplay of integrative and segregative tendencies that are expressed in space and time during the normal course of brain and behavioral function. Some recent shifts in perspective are emphasized, that may ultimately lead to a better understanding of brain complexity 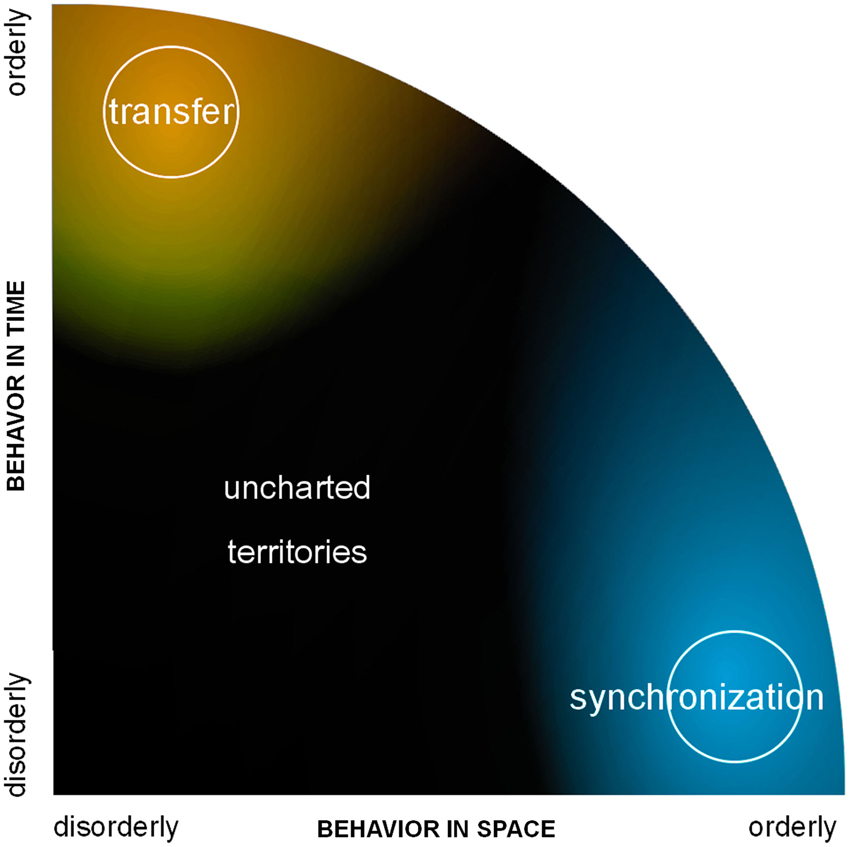 How does the brain work? This nagging question is an habitué from the top ten lists of enduring problems in Science’s grand challenges. Grasp this paradox: how is one human brain—a chef d’oeuvre of complexity honed by Nature—ever to reach such a feast as to understand itself? Where one brain may fail at this notorious philosophical riddle, may be a strong and diversely-skilled army of brains may come closer. Understanding of the local principles at play has emerged due to the combined efforts of many scientists: neurons talk to their partners by teasing them with charged particles of either excitatory or inhibitory effect, as Nobel laureate Sir John Eccles demonstrated (Eccles, 1966). Targeted release of ions was later shown at sites that seem designed for the exchange of information: typically the axonal termination of the emitting neuron facing the dendrites of a receiving partner (Hodgkin and Huxley, 1952). Many of those two-some neural interlocutors build into a reticulum with remarkable emergent properties. A booming network science followed, generalizing microscale principles on a large-scale. David Rumelhart and James McClelland, Stephen Grossberg and many others pursued this connectionist endeavor (Grossberg, 1976;Rumelhart and McClelland, 1986). Putting function first, they aimed to model specific aspects of human cognition and behavior such as visual perception or language. Yet others, such as Olaf Sporns have devoted much effort to the neurobiological fidelity of their inquiries, conceiving behavior as an emergent phenomenon from an appropriate connectional design (Sporns et al., 2004). The latter may be probed both with theoretical connectivity models where brain complexity is carefully thought through (Sporns et al., 2000) along with empirically-derived models that borrow their connectional blueprints from images of “real” brains (Honey et al., 2010). Though brief, this historical overture suggests that the brain has demonstrable mechanisms for both point-to-point communication of information—most obviously at the microscale—as well as emergent phenomena arising from network properties at the meso- and macroscale.