An important class of economic models involve agents whose wealth changes due to transactions with other agents. Several authors have pointed out an analogy with kinetic theory, which describes molecules whose momentum and energy change due to interactions with other molecules. 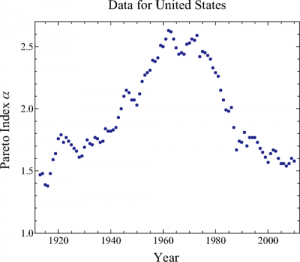 We pursue this analogy and derive a Boltzmann equation for the time evolution of the wealth distribution of a population of agents for the so-called Yard-Sale Model of wealth exchange. We examine the solutions to this equation by a combination of analytical and numerical methods and investigate its long-time limit.

We study an important limit of this equation for small transaction sizes and derive a partial integrodifferential equation governing the evolution of the wealth distribution in a closed economy. We then describe how this model can be extended to include features such as inflation, production, and taxation. In particular, we show that the model with taxation exhibits the basic features of the Pareto law, namely, a lower cutoff to the wealth density at small values of wealth, and approximate power-law behavior at large values of wealth.

Kinetics of wealth and the Pareto law